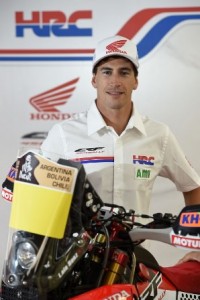 Rally mastermind Wolfgang Fischer became aware of Barreda in 2011, and decided to take him under his wing. The Spaniard immediately felt at home in his new environment and managed to kick-start his career. In 2012 Barreda entered the Dakar Rally for the second time, and it did not take long for him to grab people’s attention. He matched the pace of the leading Dakar riders and finished on the podium at four stages, eventually topping his stunning performance with a stage win.
In 2013, Barreda set about proving that his success was no flash in the pan. The rider from Castellon amazed the world with a hugely impressive performance that finished with four Dakar stage wins. If it hadn´t been for a setback due to mechanical gremlins, he would have undoubtedly ended on the overall podium. Further demonstrations of his riding prowess were shown with victories at the Baja España – Aragón in 2012 and 2013, and the Pharaons Rally in 2012.
In the most recent Dakar 2014, Barreda showed his enormous potential: he was the rider with the most stage victories and was in the running for the overall title. However, a bad crash in the penultimate stage as he battled for the leadership, put paid to his chances of a final podium place. This 2014 Joan won the Qatar Sealine Rally, 2nd round of World Championship, with Team HRC.