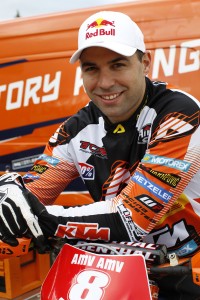 Antoine Meo. A former motocross rider, he debuted in the World Enduro Championship in 2008 with Husqvarna, where he placed fifth. In the following year, Méo finished second to Mika Ahola in the E1 category. Continuing with Husqvarna, he won the world title in 2010 ahead of countryman Johnny Aubert. For the 2011 season, Méo moved to the E2 class and claimed his second title. He returned to the E1 class, winning the 2012 and 2013 titles with KTM.
In 2009 and 2010, he won the International Six Days Enduro (ISDE) World Trophy with the French national team.