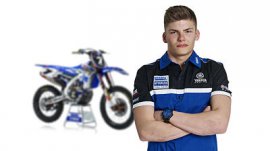 Brent Vandoninck is another of the young hopes for Belgian motocross and from a nation that have accrued the most number of titles and success in the FIM Motocross World Championship.

The nineteen year old from Herentals was initially brought into the Kemea team with designs on a firm bid for the European EMX250 contest; a series in which ‘BVD’ grasped his first podium in 2013 and maiden victory last year. After impressing during pre-season outings on the factory-engined YZ250F Brent has now been lifted to MX2 GP duties alongside Benoit Paturel.