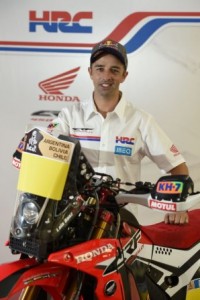 Portuguese Helder Rodrigues, 35 years old, known as ‘Estrelinha’ (‘Little Star’), is entering his ninth Dakar Rally. After his first podium in 2010, the 2011 season was the Portuguese rider’s strongest to date concluding with the World Rally-Raid title.Helder is best known for his successful participation in the Dakar Rally, although he already held a pretty impressive career record before taking on the desert rally raid. After making his way up through regional and national motocross and Enduro disciplines, Helder won his first Portuguese National Enduro Championship in 1999, and in the same year finished runner-up in the European Enduro 250cc class, as well as winning an ISDE gold medal. Seven further national Enduro titles followed, while Helder finished in the top 10 at the World Enduro Championships before he made the decision to race in the 2006 Dakar.
Helder has participated in the Dakar Rally on eight occasions taking 6 stage wins and 2 podium finishes. The 34 year old rider has shown his capabilities, talent and experience which make him one of the legitimate favourites for Dakar victory.