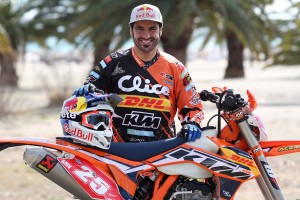 Born in the coastal town of Cambrils, Spain in 1982, Iván Cervantes began his motorsport career as a motocross rider, achieving five national titles before turning his hand to enduro. Iván was just 23 years old when he made racing history in 2005 by becoming the first ever Spanish Enduro World Champion in E1. In 2006, he repeated this achievement and went on to win the World Championship in the E3 category in 2007.

Iván’s career so far has proved that he is one to watch in the world of Motorbike Enduro. Since the beginning of his professional career in 1998, his form sheet has been a series of first places and podiums. From his first ever win in the Junior MX Championships in 1999, through domination of the Spanish Championship and into the Enduro World Championships, Iván has proved time and time again that he is a finely skilled and hugely determined rider who never deviates from absolute commitment.

His ambition is to win two world titles in each of the Enduro categories before going on to win the Dakar; goals which Iván is getting ever closer to achieving.