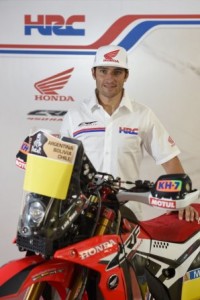 ‘Jere’, is the eldest of seven brothers and has always been single-minded about how to achieve success.

At seven years old he already had petrol in his blood, when he was given his first motorbike, a Honda 50cc! He became champion in Chile in youth competitions and went to America, where he won the prestigious Loretta Lynn. He was the first South American pilot recognized in SX and MX, where he competed, first, as an amateur and subsequently as a professional with Honda in several teams from 1998 to 2004.

He participated in the 2007 ISDE finishing in fifth E2, an accomplishment he repeated in 2010. The arrival of the Dakar to South America in 2009 bought a new perspective to the rider, who had been on the verge of retiring, inspiring him to take part in the 2012 edition in an assistance role, and then taking part himself in 2013. In just three years, the Chilean has shown a great capacity for learning and excels himself race after race.

In the most recent Dakar 2014, ‘Jere’ finished the top Chilean rider, and were it not for an accident a stone’s throw from the finish line in Valparaiso, he would have made history, but was instead left narrowly missing the podium with a fourth place finish.

The Dakar rally in 2015 was the first season as official rider in Team HRC. He had a good performance and he helped Joan Barreda to finish the dramatic stage in the Uyuni salar. In the second marathon stage, he gave his engine to the Spaniard in order to finish the race. The best example of teamwork.