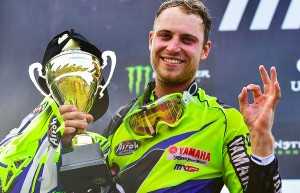 At 25 years of age Jeremy Van Horebeek is starting to enter the peak of his capabilities at the very highest level of motocross racing and his runner-up slot in the 2014 campaign – just his second in the premier class and first on the works YZ450FM – was vindication that the hard-working and technically gifted Belgian is on the right path to bring yet more glory to his country’s decorated hall of fame in the sport. Spotted and hyped as a teenager, Van Horebeek celebrated his first Grand Prix success just three seasons into his career.

In 2012 the speed, fitness and experience came together for his most consistent GP term to-date and ‘JVH’ finished in the top three in over twenty of the thirty-two motos run that year. Recording 10 podiums in his last attempt at MX2 (he had reached the age ceiling of 23 for the class) a switch to MXGP lay ahead and Van Horebeek excelled with more regularity in what was his second factory ride. He was a persistent fixture in the top five of the blue ribbon division and on 450cc machinery. He came agonisingly close to a maiden MX1 podium on several occasions but his 431 points (only sustaining two DNFs from thirty-four motos) was ultimately good enough for seventh position in the table – the last ranking of the MX1 era before the re-labelling to ‘MXGP’ – and was sufficient to convince Yamaha that he was the man to lead development on the new YZ450F in 2014.

Van Horebeek closed 2013 with a superb victory as part of Team Belgium at the Motocross of Nations in Germany and that was the springboard for an emphatic Yamaha debut in 2014. Twelve podiums, eleven of which in a row with a landmark first MXGP win in the Czech Republic, pushed him into the position of a consistent threat to eventual champion Tony Cairoli and he achieved his goal of a top three championship finish at the penultimate round in Brazil despite an injured ankle. Van Horebeek will run his usual ‘89’ as part of his racing programme in 2015 but his real job will be to covert that status as number ‘2’ into the much sought after ‘1’. More than ever for ‘Jere’ the time is right.