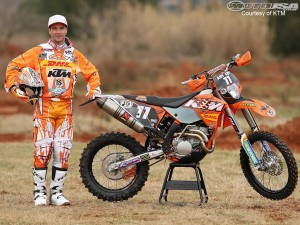 Johnny Aubert was born into a real MX family in 1980 was given his first 50 ccm bike at aged 3 and rode his first race one year later. As the family lived close to the Belgian border, his first competitions were in that country. He first raced in France at 12 and won the race, which included a rider called Sebastien Tortelli.

The following years, both in MX and SX Johnny enjoyed some spectacular successes as well as humbling moments, which helped to shape him into the relaxed and balanced rider he is today.  In 2003 he raced in the USA but returned to Europe in 2004.

In 2005 he switched to Enduro and was second behind David Knight in 2006 in his first race at the Indoor Enduro in Genoa. He took his first Enduro podium at the GP of Sweden, led the championship after 3 GPs before injury took him out of title contention. He finished fourth and the following year he was third.  In 2007 Johnny became only the third French rider to win the ISDE.

In 2008 he was world champion, joined the KTM Enduro Factory Team in 2009 and won another E2 world title. Johnny contested the E1 class on the 250 EXC-F in 2010, finishing second after illness robbed him of two rounds. He won the ISDE with the French team and the overall classification on his 450 EXC.

Johnny was out through injury for the second half of the 2011 season after a debilitating crash at the GP of Greece but he returns to lead the E2 title chase in 2012, this time riding a KTM 450 EXC. He rode in the Dakar Rally for the first time in January 2012 competing on a KTM 450 Rally Replica series bike and finished a very creditable 14th overall. This test of almost 9000km traversing South America was a perfect test to indicate he is back in form and ready to race.

Johnny Aubert is widely recognized as one of the most skillful and balanced riders in the elite Enduro class. He is a all-rounder but especially excels on wet, slippery and grassy surfaces like those at home in France. In 2012 he is again partnered by Spanish rider Cristobal Guerrero in the E2 factory lineup and will surely add to his 35 career GP victories.