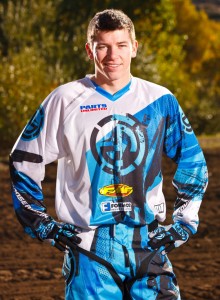 Born in Inverell, NSW, Australia on April 21, 1988, Josh Strang grew up a small town and went to school like a normal kid. It wasn’t until he was four years old that he had his first ever motorcycle ride on a Suzuki JR50. Three years later at age 7, Josh competed in his first race and continued to complete in local state races but was never was very serious about it. At about age 15, Josh decided that racing was what he wanted to do and began, with the support of his father, to compete in the Australian Championships. As mainly a motocross racer, Josh made the switch to off-road racing in 2006 and promptly finished second in the Australian Championships. Team FMF Suzuki took notice and gave Josh a chance to compete in the GNCC series in 2007.

The 2007 season was a learning year for Josh, he was able to make on podium in the XC1 pro class and finished out the year eighth overall in the very competitive GNCC series. 2008 brought the all-new fuel injected Suzuki RMZ-450 and Josh had a much better season, nailing down 7 podium finishes and grabbing his first-ever GNCC win at the Yadkin Valley Stomp GNCC in Yadkinville, NC. Josh continued his progression in the GNCCs during the 2009 season, battling until the final round of the season for the championship against rival Paul Whibley. While Josh fell just short of his goal of winning the championship, he was able to collect 5 race wins for the year and a total of 9 podium finishes and secured the number 2 plate for the 2010 season.

Having finished 3rd and then 2nd in the GNCC series in consecutive seasons, Strang began the 2010 season with one thing on his mind, winning the GNCC Championship. The year started out great for Josh and the FMF/Makita Suzuki team as he won the first four rounds of the series and finished a solid 2nd at round 5. A gnarly crash while leading the 6th round of the series put Strang’s podium streak to an end. He was fortunately okay and able to gut out a respectable 9th-place finish at that round salvaging valuable championship points. The next three races before the Summer break didn’t go as planned, but time spent testing prior to the return to racing left Strang ready to get back into the winner’s circle and clinch the championship. After a 3-hour long battle in Tennessee with championship rival Charlie Mullins, Strang took the win at the 11th round and went into round 12 in Ohio only needing to beat Mullins to clinch the championship with one round still remaining. After a rough start to the race, Strang made a last lap pass on Mullins making him the 2010 GNCC Champion.