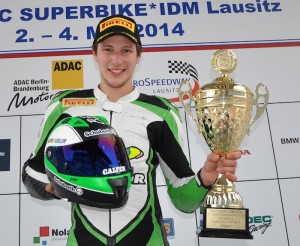 Marvin Fritz is since 1994 a member of the ADAC Motorsport Club eV Schefflenz and is in since 2004 Junior Team of the ADAC North Baden promoted together with four other talented young drivers from the North Baden. As a four year old he won his first race in Schefflenz on a 50cc motocross machine. His first title he won in 1999 at the Baden-Wuerttemberg Championship motocross in the 50-cubic-class, a year later, in the 65-cubic-class. In 2002, he allowed the ADAC North Baden, who had become aware of the young talent on the gaueigenen minibike dabbling in road racing. Twice he was German Champion in the ADAC Mini Bike Cup and runners-up once before in the 125 cc 2005 – boarding series of ADAC A year later, Marvin Fritz drove the youngest pilot asphalt, the 125cc IDM.. The passion for fast Bikes is no accident: Father Wolfgang Fritz ran successfully for years in the German motorcycle road Championship alongside future Grand Prix greats such as Stefan Prein, Dirk Raudies and Ralf Waldmann. Rüdiger Eberle (rue)