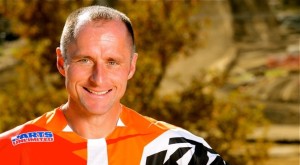 Mike Brown (born May 1, 1972) is an American former professional motocross racer. He was the 2001 AMA 125cc motocross national champion.

Brown competed in the United States in 2001 and won the AMA 125cc national championship. In 2006, Brown finished 29th in the AMA MX Lites class and 15th in the MX class, racing for Suzuki. In 2007, he returned to Europe to compete in the MX1-GP championship, finishing in seventh place. In 2011 he competed at the Moto X EnduroX at X Games XVII and won the silver medal. He won gold in the same event at X Games XVIII the following year. He got another silver medal in EnduroX in 2013 and a gold medal in 2015.

Brown is a playable character in the 2004 motocross video game MTX: Mototrax.