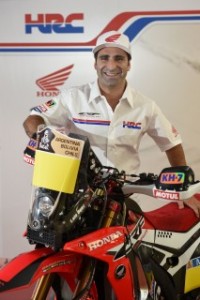 Paulo “Speedy” Goncalves is a race veteran with a long-standing off-road background. The Portuguese family man has been a fixture on the rally raid scene since 2006.

Known to be a real team player, Goncalves has a very good rapport with everyone he works with and is highly regarded for his positive and cheerful manner.
On the bike, he boasts impressive speed, ability and experience. The 34-year-old first appeared in the Dakar in 2009; two years later he won his first stage, backing it up with several podium results in 2012.
Recently in 2013, Goncalves finished the Dakar in tenth place overall. His best motorcycling career achievement was clinching the 2013 world title, after a great year that saw him triumph in Brazil, and miss out on victory in Morocco by just a few seconds. He has, undoubtedly, grown in self-confidence, has become more consistent, and likewise, has made considerable improvement in handling, navigation and speed.
This 2014, Paulo won the opening round of the World Championship, the Abu Dhabi Desert Challenge and ends the season as FIM Cross-Country Rallies World Championship runner-up.

The best start in a season for ‘Speedy’ Goncalves is 2015. The fast Portuguese rider shines at Dakar Rally when ends in second place in the Buenos Aires podium after 1 stage win.