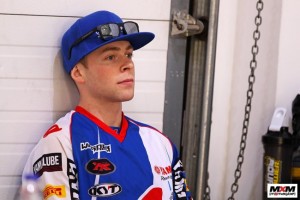 Frenchman Romain Febvre is part of the Wilvo Nestaan Husqvarna Factory Racing team in the MX2 class of the FIM World Motocross Championship. Born on 31st December 1991, he first made a name for himself in 2006 when he finished runner-up in the French Supermoto 85cc Championship, and the following year he won the 125cc class of the same competition.

In 2011, he won the UEM EMX250 Championship on a KTM for the Wagner Meca team, and the following year, riding for Team KTM Bodo Schmidt, he made his debut in the World Championship at the Grand Prix of the Netherlands at Valkenswaard. He finished the year in 13th place in the MX2 standings.

Romain joined up for the first time with Jacky Martens at the Wilvo Nestaan JM Racing KTM team in 2013, but could only end the year in 12th place in the MX2 standings having missed four rounds due to injury. However, he was able to show everybody that he had improved his sand riding skills, particularly at the final round in Lierop, where he finished in fifth position overall.

In 2014, this time riding a Husqvarna FC250, things were looking much more positive for Romain, as he took two holeshots at round five in Bulgaria, where he came agonisingly close to scoring a top three moto finish, and then another holeshot in Valkenswaard, where he finished second overall. With three rounds to go, he currently lies in third place in the World Championship MX2 points standings.